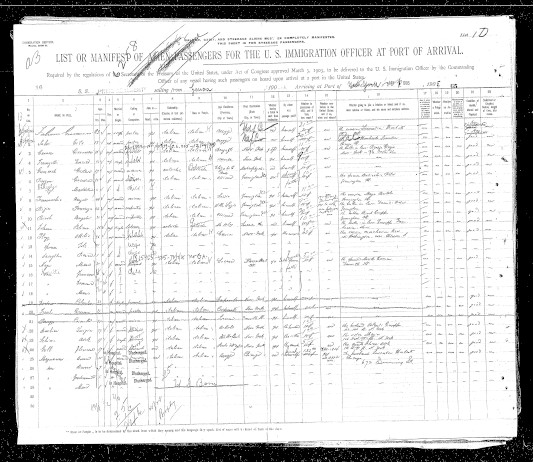 I remember growing up being so proud that I was 25 percent Italian.  Every time I would say it though my father would get upset and point out that I was 100 percent American.  Yes I am and was 100 percent American and I am proud of my heritage and history in the US also.  My family on many lines has been in the US since before the US was the US.  That doesn’t stop me from also being proud of my genetic heritage also and how much my ancestors went through to get to the US.  My grandmother’s family left Italy in the early 1900s and came through Ellis Island with my Great Grandfather coming first. My Great Grandmother came over by herself with three very little kids, afraid that she would be turned back if anything went wrong – including a runny nose!   I feel I have to acknowledge ALL the strong amazing people in my history, not just the relatives that were born in the US.  In some cases the ancestors that fought to gain citizenship and then lived through being treated like second class citizens because of coming over to the US later than others have more to be admired for.  They have amazing stories that should be told also.

My great grandfather came to the US to make a place for my great grandmother and settled in Clinton IN (they later moved to Belgiumtown in Illinois). He took a job in the coal mines – which is not easy work, and made a home for the rest of his family to come over and settle at.  He passed away when my grandmother was just a couple years old of the flu of 1918, leaving my great grandmother a widow with 10 kids and no means of support.  My great grandmother went on to raise a garden – they ate what they could raise, clean houses for some of the widowers, and her sons that were still unmarried and were old enough to go to work in the mines took jobs.  At the time though, the oldest children were less than 18 years old….

My grandmother ended up being the only child to go on to high school and as the youngest all her siblings contributed some money for her to get to attend.  She finished high school and became a kindergarten teacher.  Grandma borrowed books and did what she could to get through school….

Each time I see the recent news against different immigrants coming into the US, I can’t help but be reminded of how my great grandparents were treated – especially during the World Wars when Italy was at odds with the US.  My ancestors had sworn allegiance to the US, but were still viewed as suspect.  I feel the times weren’t as dangerous then as they are now with the current acts of terrorism, but treating any American that has a certain genetic makeup as if they are not 100% American is not following the ideals this country was founded on.

Give me your tired, your poor, your huddled masses yearning to breathe free.”

This country was founded to be a great American melting pot.  Everyone in the US (other than the Native American’s) is descended from an Immigrant.  They may have come before the country was founded but they still came over from another country.  It amazes me that being here first seems to give some people the feeling that they are able to choose how to treat other groups.

All in all though I do still feel proud of my genetic background, but I’m also proud that I am 100% American also.  Being American will not stop me from following the traditions and researching more about the groups that I descended from.