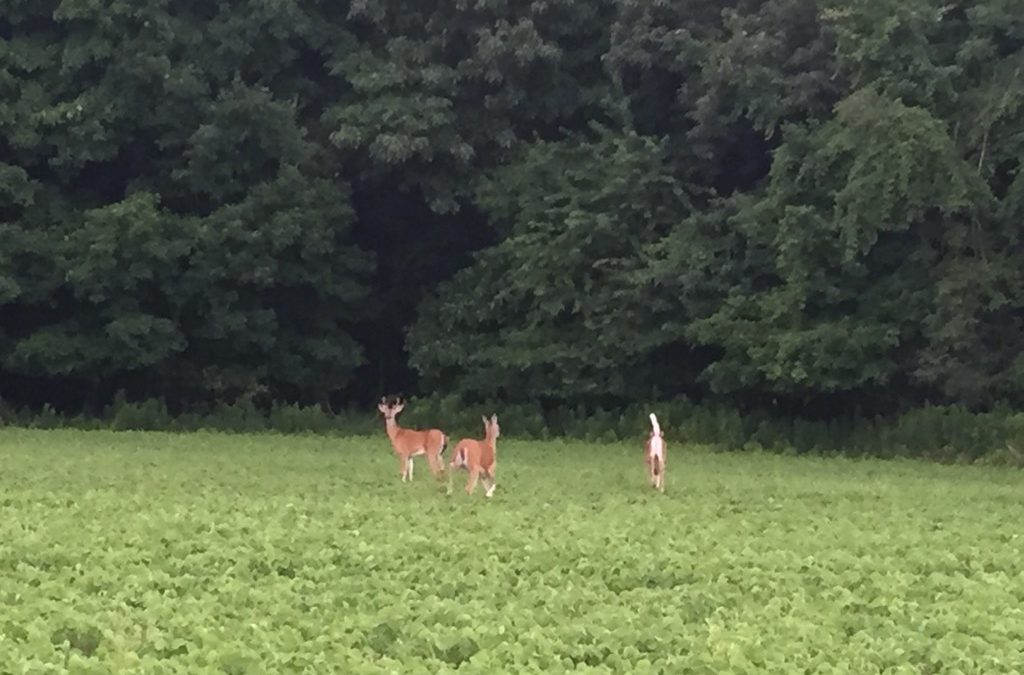 Visiting home it’s not unusual to see deer. – Growing up we actually had deer as pets!  The deer I see on visits now are w hite tail deer, indigenous to the state of Illinois.  (Growing up our deer were Fallow Deer) They are kind of like large rodents as far as farmers are concerned, but are also great for a beef replacement and a lot cheaper.  Deer come into fields and eat the corn when they have a chance.  Farmers can get nuisance permits to hunt in the off season on their own property to deal with deer coming to literally eat their livelihood.  That being said, deer are cute!  Speaking as someone that has several as pets, they are a little like cute farm animals that will eat from your hand when they are comfortable with you.

From past experience though deer can also be dangerous…. I’ve seen deer throw a tire in the air with their antlers and also hit the sides of their cage and knock the person standing next to it down on the ground. Deer can jump high into the air, so we kept ours with a cage made of old corn cob sides that were raised in the air enough to keep them in. The buck was dangerous with antlers, but I was always convinced he was trying to play with us like he would with other bucks in the herd.   Now though, our deer watching amounts to watching White Tail Deer from a distance.  They come into the fields to snack on corn and bean plants at the early hours of the day and just as the sun starts to set.

I like to take pictures of the deer – I actually caught a video of a deer the other day that walked beside our car, turned to look at me as if staring me down and then just started peeing. So far the only shooting I’ve done of deer are pictures……

The deer are everywhere.  We see them crossing roads, in the fields, and even every night at the Oakwood rest stop on our last visit. Some of my pictures are quick pull out the camera there they are again, and others are thought out, they aren’t moving pictures.  When we are home for good, it will be fun to try to catch deer in all their different stages.  I’d love to catch some fawns with their spots!

I can’t bring myself to actually hunt deer.  The last hunting I did was raccoons I think with my father.  We also hunted frogs for the legs and caught fish.  I’ll remember the traipsing across the field, shotgun, dogs included, and off to look for raccoons.  I also remember the sound of the raccoons squealing after they fell from the tree. The frogs I could take or leave and they went with the turtles that for us kids really just meant we got to play with heads…  Fish were something my father kept stocked in the pond.  I was horned by a catfish at a pond at the farm we called the Ranch and refused to fish anything but Sunfish and Bass after that.  Totally another story….

Now even with spiders I have a hard time killing them off myself.  I once put a spider in a container and told it, if it could get out it was free to go….  I couldn’t bring myself to kill it, but I also couldn’t LIVE with it in my house…. Don’t get me wrong! I don’t have any problem with others hunting as long as they use what they kill and don’t just shoot it and leave it.  Shooting for sport is wrong.

I remember as friends of my parents coming over to hunt over the years.  Sometimes the hunt was bow, and sometimes there was drinking.  I don’t remember seeing my dad drink much, so for me it was always a little funny to see the drunks come over and stumble around with plans to go out and hunt with fatal weapons.  I’ve seen them make plans to walk down each side of the field pointed at each other with shotguns, looking for deer to hunt.  Heading out with coolers of beer….  The time I remember most though was the friend of a my parent’s friend that came over drunk with a bow and needed string it.  He tried with an arrow in the bow!  I don’t think my parents let me see the gash, but someone had to rush him to the emergency room after that.

My dad would go out each year though and get how ever many deer he had permits for and hang them up, then my parents would spend the next few days packaging all the meat.  The kitchen table would be covered with a meat grinder, freezer paper, and parts of meat. My dad would run out to the barn and cut chunks off as they were ready for more and he would cut them up inside with big knives.  The deer were always hung up out in the machine shed.

A couple times my mother decided she wanted to cure the hides and dad took the hides off also. My brother and I had some play space set up in the basement…. Basement for us meant old concrete floor unfinished over 100 year old house where the coal furnace had been that was open to the dirt in some spots.  My mother took one room of the basement, read some books on tanning hides (the internet didn’t exist yet), and gave it a try!  I think the first step was to dry the hide out with salt, so the hides were in the basement covered in salt for months.   I don’t remember them passing that stage, or even what happened to them, but I’m sure they aren’t still in the basement of the old house with my brother living there now!

I do like venison, though the thing I like most about it is that it’s free.  To me it seems I’d be hypocritical to not be a vegetarian and say I won’t eat venison.  I’ve never really been able to tell the difference in taste.  If someone showed me two cuts of meat, I am fairly certain I could tell you which is which – deer is a lot leaner meat….  But my taste buds just aren’t that refined.   There is a difference in where the deer came from.  I know some deer come from areas that make them taste gamey.  Our area makes the deer taste the same as cows in my view. When I see deer running around in the field, my first thought isn’t that they are dinner – though I do have to admit it is in the top 10.  I’d say though I have the same thoughts about a cow.

Growing up dinner almost always amounted to my mother sending us to the freezer to pull out a type of meat.  We had huge deep freezes in the garage to store all the venison and by type of meat I don’t mean cow or venison.  Type of meat was written on each white wrapped package in black permanent marker!  There were tenderloin, beef chunks, hamburger, little steaks, deer roast, and more.  All labeled in my mother’s writing and all packed into the freezer in the white paper.  – Now my mother goes to a processing plant and gets the meat in a professional looking package.  She takes in any deer they have gotten and the butcher lets her know when it has been turned into what she has listed.  We just tried some new types of deer sticks this last visit!

I have no idea what will happen when we retire and move home.  Will my husband decide to give hunting a try?  I can’t see my children deciding to shoot deer with anything but a camera…